About 40 people attended throughout the morning, to learn more about the water recycling process and why releases were necessary in times of consistent high rainfall.

Executive Manager Customers, Community and Communications David Radford said attendees were appreciative of the opportunity to see the quality of the recycled water being released and ask questions.

“Those who attended certainly expressed their appreciation of being able to meet informally to ask questions about the releases they didn’t already understand,” he said.

Releases from the Metung wastewater treatment facility into the adjoining Tambo Bay wetlands began last week, but due to favourable weather were able to be ceased Saturday afternoon.

“Releases began last week in anticipation of significant rainfall for the district, which ending up affecting other areas of the state,” he said.

“We knew such high rainfall as was predicted in such a short period of time was something our system would not cope with, which is why we began releasing in preparation.

“Our operations staff are happy with our capacity of our lagoons now that we have been able to release some of that stored water and hopefully weather conditions will improve to allow commencement of irrigation.

“If weather conditions continue to be favourable, it is anticipated that we could get through the coming months without needing to undertake further controlled releases.

“This could change rapidly if heavy rain prevents us from irrigating and impacts lagoon storage levels, as we have seen occur previously,” he concluded. 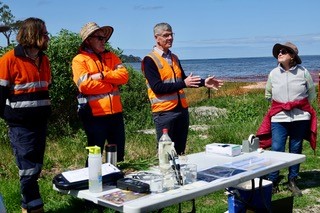