Their canvas has been the 50 year old Dalmahoy Street pump station building in Bairnsdale.

Tracey McKeown, who has also been the project manager, teaches art to both indigenous and non-indigenous students at Federation Training in Bairnsdale. She says the painting of the pump station has been an educational journey for the students involved, who are aged 17 to 40.

“Our theme has been bushfoods, reflecting the environment that surrounds the pump station, with references to aboriginal hunting tools”, says Tracey. “The students have explored the past and current use of bushfoods. They travelled to Eagle Point in search of traditional foods and native animal tracks and researched the plants and trees, including their culinary and medicinal uses. Each student also chose a native animal that would have formed part of the local Aboriginal diet and created an art piece that reflects the environment of these animals.”

“This initiative has been very exciting for everyone involved, adding to the current growth in awareness of indigenous arts and culture in East Gippsland. We’ve had youth participating in Aboriginal-inspired public art projects around Bairnsdale, such as vibrant artworks transforming bollards in the CBD and the ‘mountain to the sea’ dreamtime mural in the Aldi supermarket car park.”

For the latest project the students have painted the south wall of the Dalmahoy Street Pump Station, using ochre-inspired colours for the background, with the main elements of their design highlighted with vibrant colours. Gunaikurnai artist Alan Solomon has brought cultural vibrancy to the west wall of the building with a modern Koori-inspired design. Finally, Tracey concentrated on the remaining two walls, where her non-indigenous artwork focuses on waterway foods that were traditionally consumed.

Managing Director, Bruce Hammond, says East Gippsland Water approached the students to help rejuvenate the pump station and is delighted that they took up the challenge. “We’ve had the exteriors of other buildings literally transformed by Aboriginal-inspired artworks, so we’ve been very much looking forward to the final result”, he says. “It’s been great to be able to assist with bringing awareness of traditional Aboriginal culture to the community and we’re honoured to be involved in the cultural acknowledgement that is sweeping East Gippsland”.

All the art pieces for the project have been developed in consultation with the Gunaikurnai Land and Waters Aboriginal Corporation (GLaWAC). 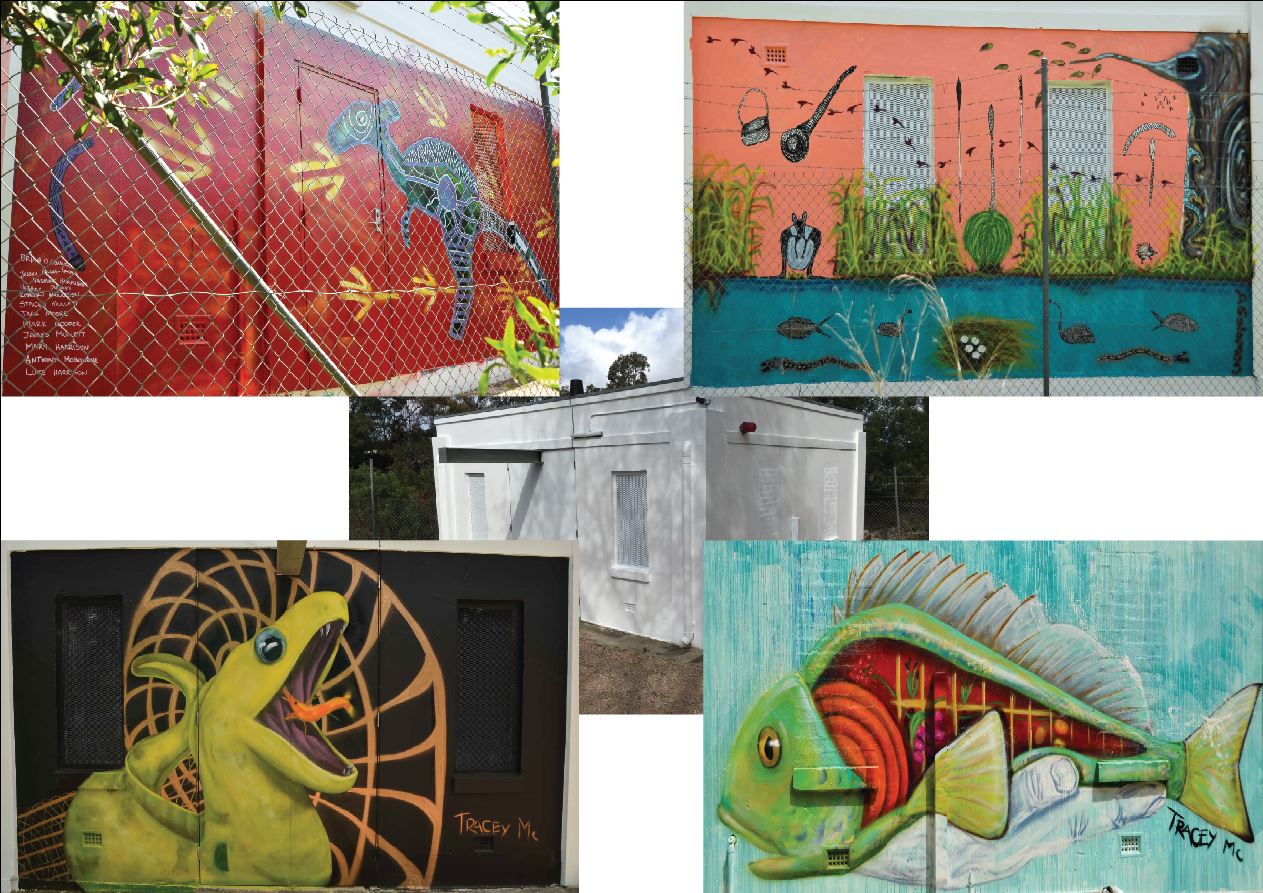