A specially designed nesting box has been installed at East Gippsland Water’s Bruce’s Track property near Swan Reach, which it is hoped will prove irresistible to an endangered species of owl.

The bird being targeted is the masked owl, in a joint bird conservation drive involving the water corporation and the Gippsland Plains Conservation Management Network. This project has received funding support through the Victorian Government’s Threatened Species Protection Initiative.

Tom Crook, the network’s facilitator, said, “Masked owls live in forests and woodlands, including on the fringes of open farmland. Bruce’s Track has an identified population, so it makes sense to focus on this site and other known locations in East Gippsland in an effort to build up the owl’s numbers.

“Masked owls are identifiable by their white, heart-shaped face, or mask, surrounded by brown feathers. They’ll breed at any time of year, given favourable conditions such as a plentiful food supply.

‘We’ve installed a special nesting box on a tall tree at Bruce’s Track, designed to simulate their preferred nesting environment. We have also attached a data logger to the tree to try and ascertain the ideal temperature for nesting to occur.”

East Gippsland Water’s Managing Director, Bruce Hammond, added, “We’re delighted to be able to support this very worthwhile conservation effort, which complements our commitment to safeguard the natural environment through our operations.”

East Gippsland Water is also working with the Gippsland Plains Conservation Management Network on a project that it is hoped will see peregrine falcons nesting high up on the water tower in the centre of Bairnsdale – helping to reverse the bird’s declining numbers in the Gippsland region. 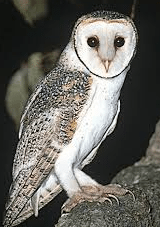